A friend of mine was showing off his little flash drive he had on his keychain and when I compared it to my clunky Sandisk Cruzer I knew he just cost me money!  Techbargains had a coupon deal on the Corsair so I bought one.  What I really like is the Corsair Voyager is USB 3.0.

The Corsair Voyager is made out of brushed metal.  The key ring holder is rubberized and is held on with a pin that swings easily so it won’t get caught up on your keychain.  It also includes the key-ring.

Surprisingly it was not formatted as NTFS.  I really don’t like FAT, so I reformatted the drive.  Numbers wise this is no speed demon.  But for under $40 bucks what do you expect?  I compared the speeds using Crystal Disk Mark 3.0.3.  A typical USB 2.0 drive (Sandisk Cruzer) will get around 27meg/s and the USB 3.0 Corsair gets around 42meg/s.  So there is a nice improvement.  Write speeds were not very impressive with the Corsair.  The Lexar S73 JumpDrive write speeds were more than double the Corsair.  I had a few SD cards that I also benchmarked to see where the Corsair landed.

Overall I am happy with the Voyager Mini.  The size is perfect and I am enjoying the USB 3.0 speeds. 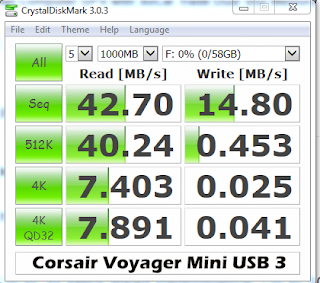