Tab Mix Plus for Chrome work around


The main reason I have stuck with Firefox is Tab Mix Plus.  It is the must have extension.  But the developer of TMP to date has no interest in porting this gem to Google’s Chrome browser.  Lately I have become so frustrated with Firefox’s speed I gave Chrome another chance and spent a couple of days searching for something to match TMP’s features.

I finally made the transition to Chrome this week.  A whole week without Firefox!  I am still not 100% sold on Chrome, I still feel the extensions in Firefox are more robust but the sheer speed of Chrome has me sold.  I found that Google makes an extension for Chrome that has one key tab feature to make it one step closer to TMP’s treasure chest of tab extensions.

Chrome Toolbox by Google has a few tab extensions that do make life easier.  The key feature is opening a new tab when typing anything on the URL line.  Since Chrome has no search window you type your URL or search request into the same area.  With Google’s Toolbox for Chrome there is an option labeled ‘When pressing enter in address bar with a URL in it, open the URL in a new tab”.  This is awesome, the most difficult part of the transition was losing my current tab every time I did a search and this solves that.

Another option in the Google’s Toolbox is “When clicking on a link, always open in a new tab”.  It’s not exactly what I want.  What TMP does is only open a new link if the domain changes when clicking on a link.  I put a request into the Google dev team about enhancing this feature but from what I am reading they don’t seem to listen to us users! 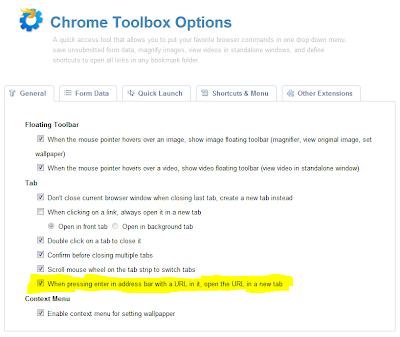