How to get rid of the iGoogle sidebar – Super iGoogle

Google made more changes recently to that obnoxious sidebar which broke the Stylish script and iGoogle Tab remover 1.9.8.  There is another popular add-on for Firefox called GreaseMonkey which supports user contributed scripts.  I found a script called Super iGoogle that removes the sidebar and actually works.
For anyone who does not understand what the iGoogle sidebar is Google decided to create a menu bar that travels vertically down the left side of the screen.  It wastes a tremendous amount of valuable screen space for no good reason.  Most menu bars travel horizontally to not waste space.

*** Google made more changes which broke Super iGoogle.  It is a minor patch to fix it, just edit the script and change G-KS with G-BT in all locations. 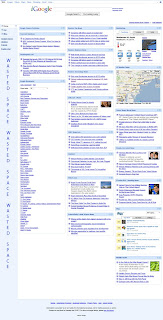